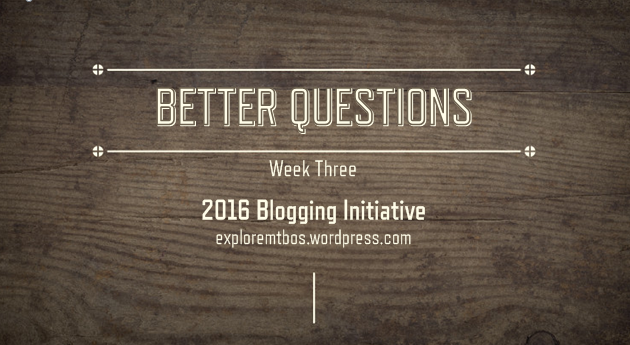 It was 9 years ago when I heard Lucy West say, that in some cultures, a question is viewed as a gift. This has always stuck with me. Since then I’ve been a little obsessed with questioning. Questioning shows up repeatedly in the 8 teaching practices described in Principles to Actions, as well as being one of the practices itself. We know that it takes time for students to adjust to rigorous lines of questioning around mathematical ideas. I’ve seen it firsthand where, upon being asked a question to elicit thinking, a student immediately changes their answer. Then, when probed further, the student changes their answer again. Students often see a question as a subtle way of an adult saying, “You’re wrong.” So, how do we get away from this? I suppose if we asked students these types of questions more often they would adapt. But, how do we model the fielding of tough questions as teachers, and ultimately learners ourselves? Do we embrace them and ponder them? Or, do we immediately try a different answer, then another, until our questioner is appeased? Here are some of the questions that have been gifts for me and students I’ve worked with in the past.

1) Early in my time as an instructional coach I was describing how we were assessing students and tracking their progress to a colleague. He asked me, “So, what are you doing for the students who don’t get it?” I didn’t have an immediate answer for how we were systematically doing this. Discomfort was the immediate effect. But, I allowed the question to sink in, realizing that if I couldn’t answer that, then there was a problem. This question has led to better processes at our school and today we do have an answer for this question. It’s not perfect, but we are using data consistently to identify students who need more help and getting them that help. This question caused immediate discomfort, but was ultimately a gift.

2) About a year ago, I was trying to decide what to do in a situation. Upon asking a colleague for some advice she asked me three questions: How will you feel about your decision in 10 minutes? In 10 days? In 10 years? She didn’t give me an answer to my question, but instead asked me a series of questions that helped me focus on what was important; a real gift.

3) Last year I got to work with a 4th grade class during a formative assessment on multiplicative comparison. The assessment asked students to compare 30 and 300. One student initially compared the two numbers by saying that 300 was 270 more than 30. I asked her to tell me more about how she had figured this out. She explained, but then said, “This isn’t what you’re looking for, is it?” Apparently, I hadn’t brought my poker face A-game. I reassured her that that is one way you can compare two numbers, but asked her, “Could you compare the numbers with multiplication?” Instead of shutting down, she reflected on how she had compared 3 and 12 in the past with multiplication, and applied this to 30 and 300, successfully telling me that 300 was 10 times greater than 30.

I was excited that a few questions bridged the gap between what this student knew and was in the process of learning. I admire the fact that she was able to reflect on the question in the moment without becoming defensive or shutting down. Even though I presented her with a line of questioning that moved her understanding forward, she presented me with a powerful example of staying calm and persevering in the moment of struggle after a challenging question. This is a practice that I hope to aspire to.